I watched the entire "2011 Victoria's Secret Fashion Show" tonight on CBS. It was a big money production with plenty of hoopla, promotion, some pretty backlit photography and plenty of costumes. I love lingerie, especially seeing it worn publicly, and there were probably some pretty outfits to be seen. Unfortunately my worst fears were realized. The visual distractions and the self-promoting hype were both excessive, many of the designs showed horrible taste. That I could have ignored, trying to observe the more pretty lingerie - some of which I managed to notice despite the horrifying and sickening starved look of the models. The best part of the 2011 Victoria's Secret Fashion Show were the advertisements for the Grammy Nominations tomorrow night. It seemed like more of a horror and freak show than it did a fashion show.

Thankfully I'd been forewarned by an article in TheGloss.com and remembered the same kind of out-of-touch-eating-disorder-promoting Victoria's Secret lingerie fashion show from last year, when the best looking model there was Katy Perry.

The overly thin models used in the show had spurred some more discussion on the subject of eating disorders. The discussion over the fashion industry's promotion of anorexia and bulimia made the news thanks in part to a confession by a Victoria's Secret model. The Hollywood Reporter did an article titled Victorias Secret Model Adriana Lima Survives Lingerie Show Without Food or Water Quoting the article, written by Elizabeth Snead on 11/10/2011: "The fourth-highest paid supermodel in the world consumes no solid food for 9 days, no water for 12 hours before the annual lingerie fashion show."

There was a video posted on (by) Victoria's Secret's YouTube channel titled "Casting the 2011 Victoria's Secret Fashion Show - YouTube", but there was no mention in the video of what criteria they were using to pick their models.

CBS did air the "2011 Victoria's Secret Fashion Show" tonight, Tuesday, Nov. 29th at 10 PM, and I had been waiting to actually watch the whole show before shooting my mouth off about it. 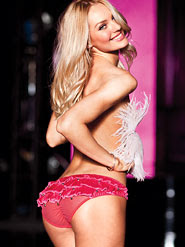 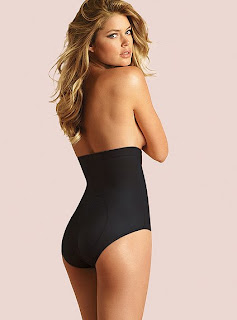 CBS News had published an online photo article titled: 12 Secret Signs of Anorexia - CBS News . I wouldn't be surprised if there are some comments on National Eating Disorders Association's Twitter page now that the lingerie show has aired. I myself had previously written a blog post titled Anorexia and Bulimia Claim Lives back in 2010.

There was a cynical look at the Victoria's secret outfits and the promotion of anorexia in TheGloss.com . Quoting Ashley Cardiff who wrote TheGloss.com article: "At this point, it’s pretty obvious that the looks at the Victoria’s Secret fashion show are supposed to be ugly. It’s like one big, weird joke that the brand plays on people: take the world’s most conventionally attractive women, workshop their bodies beyond recognition for weeks with powdered milk and water fasting, and then obscure those bodies with the most comically, outrageously, unapologetically ugly shit on the planet. Here, we try and pick up the pieces from all the absurd outfits worn by Miranda Kerr, Adriana Lima, Candice Swanepoel, Chanel Iman, and the rest of the angels. We apologize to your eyeballs/brains in advance." Gallery: Narrowing Down The Most Ridiculous Looks from the 2011 Victoria's Secret Fashion Show - TheGloss.com .


On a more positive note, the Victoria's Secret Lingerie Fashion shows are always an interesting and entertaining production almost to the point of being pretentious. Victoria's Secret is to be commended for contributing to making the public display of models in their underwear widely accepted. The modeling of intimate apparel has moved from the early days of magazine, newspaper, and television ads more than half a century ago to the pageantry of lingerie being modeled and on display worldwide on television, the internet, in videos, and on the Jumbotron in Times Square. I applaud that having undies on public display is now celebrated but really wish that there was more diversity in the modeling and fashion industries as a whole with respect to ethnicity, gender, age, and body type. Much more than that I wish the fashion industry would stop literally killing people by promoting the anorexic/bulimic look. Whatever pretty lingerie might have been there in the show was, for me, overshadowed by the horrified sickening feeling I had seeing the some of the freak-show physiques, and wondering whether the infrequency of rear views on screen might be due to the fact that many of the models didn't have rears to view.
Posted by Panty Buns at 11/30/2011 12:14:00 AM