Prudes Get Panties In A Bunch Over Diesel Underwear Photoshoot

Before I get too far into this post I just wanted to apologize again for not having done that post thanking my commenters and followers with a few notes on your blogs. I tend to get a bit bogged down agonizing over whether I should include photos from your blogs or profiles or just links and have been too lazy to get it totally together. I've written a bunch but it's disorganized. I'm also planning to do a post titled "Briefs Update" on some of the new colours of I've tried to buy and or was unable to buy and possibly including a new blouse or two. In the meantime I thought I'd post this tempest-in-a-teapot thats been in the news alot lately since it involves my favorite subject - panties!

There has been alot of hoopla recently with prudes up in arms and the tabloids getting a juicy subject as a lingerie company, Diesel underwear, rented a Brooklyn Law School library as the set for it's lingerie photoshoot and the dean of the law school apparently felt embarrassed about it afterwards claiming to not  realize the nature of the photos for Diesel's advertising.

MSN NZ reports "Law school angry over library photo shoot" after Diesel took "photographs of men and women in skimpy lingerie in racy poses alongside books and computers". Daily Mail had an online article with more photos of the models in Diesel Brand underwear posing in a Brooklyn, NY law school library as did shareordie.in which titled an article full of the photos: "Advertisement Photos of Diesel Be Stupid". In fact there were a whole slew of articles that included photos like this one: 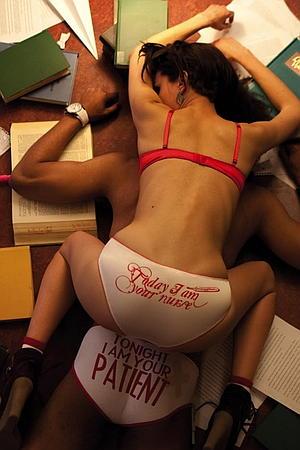 The photos were posted everywhere in the tabloids, where in typical tabloid fashion there was feigned outrage while making sure to publish the sexy photos.
The only really controversial part was that the Dean of the Law School which had rented out the space had his panties in a bunch about it after the fact, claiming the law school didn't realize the nature of the photoshoot. Just how detached from reality are all these people who claim to be offended and where do they get off railing against free speech, free press, and photos or videos of the lingerie shoot being published?
There have been far sexier and more provocative lingerie ads in the past by other companies like Agent Provocateur, plenty of public print lingerie ads by Maidenform for decades, Underwear modeled publicly by Trashy Brand Lingerie models, Victoria's Secret models on television and on the Jumbo-Tron in Times Square, The Sports Illustrated Swimsuit issue, The No Pants Subway Ride, The Jamaica Underwear Run in Central Park, NYC, several other public, and countless other events where people showed up in their panties. Appearing in public in panties has really come into vogue ever since Lady Gaga burst onto the scene seeming to appear almost everywhere out in public in her panties, including at the airport, doing screeners a favor. There were plenty of panty-clad people out protesting the TSA's policies of either seeing everyone virtually naked or else groping them to the point of it becoming a sexual assault or abuse. It seems to me that if officials are going to condone forcing people to be seen in their underwear (or less) then voluntarily being out in public should be perfectly acceptable, and in fact it has become so. Models are regularly featured in their underwear on the covers of fashion magazines and the lingerie manufacturers and retailers post videos of their lingerie being modeled in YouTube video as do their customers. Even I have posted videos of myself male modeling different full brief panties on YouTube (Mister Panty Buns's Channel) and have posted photos like this one of myself male modeling ladies panties before: 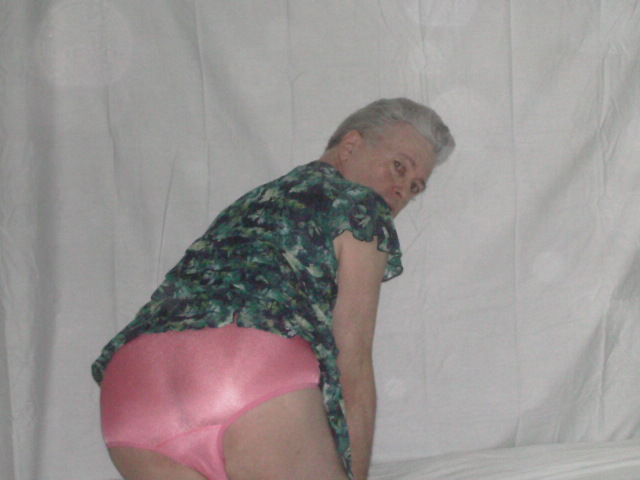 The New York Post also posted their report (with photos) on their YouTube channel in a video titled "Troublesome Underwear - New York Post".
I just couldn't resist making a comment on their video and on all the articles in general.
Posted by Panty Buns at 11/19/2010 01:16:00 PM