This post is way off topic for this blog and is about my favorite TV show, NIKITA to which I am hopelessly addicted, and here's why!:

My comment: THIS VIDEO shows touching parts of the TV show Nikita: Nikita was part of the Division strike team ordered to kill﻿ Alex's family when Alex was only 13. Nikita spared + saved Alex, escaped Division + has been trying to make it up to her ever since. The all new Nikita episode 2 x 18 "Power" airs Friday on March 30th at 8 PM ET/7c on CW TV. The NEW CW PREVIEW shows action with Nikita + Amanda but doesn't show that Alexandra's mum is alive, they love each other + how close Nikita + Alex have become.

My comment: "I wish the Nikita Promos and previews would show more of these kinds of scenes that are SO BIG A PART OF WHAT NIKITA IS ALL ABOUT! The emotions, relationships, the desperate struggles to try to make up for past wrongs - the﻿ desperation to try to save loved ones and keep from becoming a casualty against all odds. Beautiful. If you've never seen Nikita please do. Yes, Nikita is action filled and suspenseful, but will also yank your heart strings and leave you trembling with teary eyes. Beautiful."

Fortunately last week CW television uploaded the Nikita - Arising Producer's Preview to YouTube in time for us to share it prior to our successful World-Wide Trending effort on Twitter:

On Fri March 23rd "We Need Nikita Season 3" was Trending at #1 World Wide!

"AMANDA AND ARI MAKE THEIR MOVE - Amanda and Ari (guest star Peter Outerbridge) set up a board meeting with Zetrov and prepare to take over the company. After a heated face-to-face confrontation between Nikita and Amanda, Nikita recalls what Amanda was like when she was first brought to Division Meanwhile, Alex surprises Ari by showing up at the board meeting with an old and powerful friend. Shane West and Aaron Stanford also star. Chris Peppe directed the episode written by Carlos Coto."

UPDATE: The following screenshots were provided by Julie @CW_Posts_early and @KickassNikita 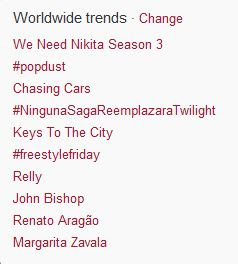 From March 30th:
"Give Us Nikita Season 3" Trending Number 4 World Wide on Twitter 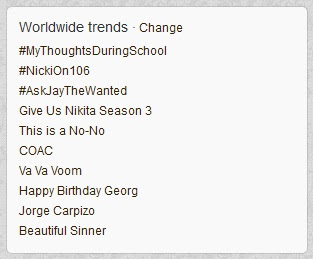 On Friday, April 6th we trended "Nikita is Addictive". After Julie got the trending ideas together by Monday night, we voted on the trend list ideas,she published. After she tallied the votes and announced the trend I tweeted it out to all the Nikita fans and cast members I follow. I got the following Retweet. Thank you Lyndsy! 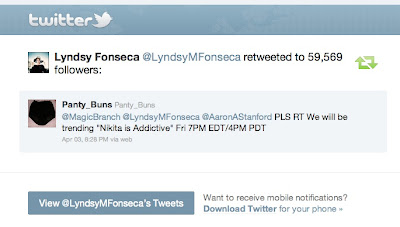 Tonight, Friday April 6th, I watched the repeat of another excellent episode of Nikita, the one Lyndsy Retweeted our intended World Wide Trend for. Here is the Nikita "Rogue" Producers Preview

One hour beforehand the tweeting for the World Wide Trend "Nikita is Addictive" began. 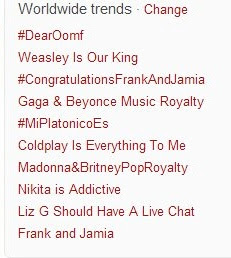 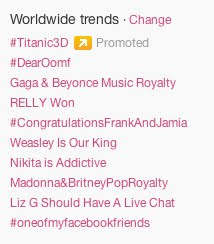 Then I watched the episode Nikita - Rogue Here's the preview clip:


Watched #Nikita "Rogue" for the second time tonight. WOW, Carla's role in Nikita's past with Percy and Amanda was incredibly complicated. Trying to discern the relationships and intricacies of the plots are dizzying.

YET ANOTHER (3rd) UPDATE

Synopsis of Nikita 2x15 Origins by CW TV: "Nikita (Maggie Q) and Michael (Shane West) try to help Carla (guest star Erica Gimpel) remember her past, which holds the key to taking down Division. Carla recounts the night Nikita was arrested and Nikita is stunned at what she learns. Meanwhile, Alex (Lyndsy Fonseca) shows up at a Zetrov press conference where Semak (guest star Peter J. Lucas) is speaking and announces that she's Alexandra Udinov. Alex demands a trade -- her mother for the empire. Melinda Clarke, Xander Berkeley and Aaron Stanford also star. Michael Robison directed the episode written by Albert Kim."

On April 13th "Save Nikita" trended World Wide on Twitter for over half an hour. Nikita Trends Graphic : 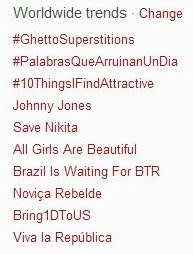 Alexandra announces who she is at the Zetrov Press conference saying: "I am Alexandra Udinov, daughter of Nikolai & Katya Udinov." After she steps up to the podium check out the look Alexandra gives Semak when she says "...but as uncle Sergei has reminded me, I can't have my family back." ? It is NOT a good idea to come between a person and their mother, especially if that someone has infiltrated Division and become a trained assassin in oreder to get vengeance on you. When Alexandra announces "an Udinov will run the company once again" Birkhoff says: "I thought she didn't want the company"."Nikita: She doesn't." Birkhoff: "Then what the hell is she doing?" Nikita: "She's declaring war" I LOVE﻿ Maggie Q as Nikita and Lyndsy M Fonseca as Alexandra. Aaron A Stanford as Birkhoff (Nerd) is a pisser. Alexandra, speaking at the second press conference: "That was the darkest period of my life. The attack on my home cost me my parents..." and to Sergei Semak afterwards: "And my mother. You will give me my mother you son of a bitch. You have until tomorrow morning to decide. And thanks for the suite."

For Nikita there is are huge and disturbing developments. It turns out that Carla, who "saved" her from addiction, was involved in founding Division, the black ops unit that has gotten out of control. Carla it has turned out is close to Percy. Another revelation is that Amanda who both teaches poise and beauty to recruits and is division's torturer (played by the gorgeous Melinda Clarke) is in bed with the head of the Russian mercenary company Gogol, Ari Tasarov. Amanda (played by Melinda Clark) is absolutely gorgeous - and also ruthless. Nikita has flashbacks of Amanda training her and Michael has a flashback of Amanda first beating and then shooting a prisoner who had been recruited by Carla for Division long ago. Nikita tries to tell Carla "You've been away a long time." "You don't know what Division has become".

Carla and Amanda both hate and want to kill each other. While Gogol is trying to surreptitiously kill Alexandra, Seymour Birkhoffs has computer hacked into Zetrov, scrambles the hotel security cameras so Gogol can't see Alex and re-routed the security feeds to monitor them including the exterior feeds to and be Alexandra's eyes and ears. Carla has snatched a tablet that Birkhoff has routed the exterior security camera feeds to and which Michael, Nikita and Birkhoff were going to use as blackmail against Amanda and Ari to keep Alex safe. Carla wants to use it to get Amanda killed and doesn't care about Alex.

Birkhoff (a.k.a. Nerd) provides an unexpected lethal side and some comedic relief with a straight face in a serious situation when he levels a gun at Carla, demanding she put the tablet down. Birkhoff says to Carla: "Lady - put that down - now." And to Nikita: "I hate to tell you this but your friend is cuckoo for a certain cereal." When Carla is on the verge of using the tablet to get at Amanda and says "Which brings us back to "put my hardware down, bitch."

Even funnier is the end of the scene in the next episode of Nkita, 2x16 between Nerd and Sonya, the new Division genius techie. I think Sonya and Birkhoff would make an interesting item. Birkhoff to Sonya: "And that is why you fail - except at hotness - at which you succeed." Sonya: "What?" Nerd: "You heard me." (She smiles).

I sure hope we can save Nikita and have a Season 3! The All NEW Nikita Episode 2x19 "Wrath" airs Friday April 20th, 2012 at 8 PM EDT/7c on CW TV. We will be trying to trend #RenewNikita at 7 PM Eastern time and if it doesn't trend will be adding "Wrath of Nikitaverse". I'll start a new blog post for that! 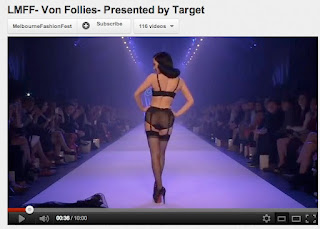 I doubt that I. @Panty_Buns will ever get that famous but I think I might already be the world's most famous male panty model thanks to my photos and videos being posted in so many places - as Panty_Buns on Photobucket, Panty_Buns in Twitpics, Mister Panty Buns on YouTube and, of course, the photos of me in my panties on my WordPress blog page
Posted by Panty Buns at 3/13/2012 07:00:00 PM 7 comments: