You undoubtedly guessed it from the title of this post: There's about to be another opportunity for me to get seen world-wide out in public in my panties. Apparently I did NOT yet miss the chance to participate in Freshpair's National Underwear Day after all! You read right! There's still a chance I could realize my dream of getting world famous in my panties by going shopping for underwear in my underwear on National Underwear Day at Freshpair AUGUST 22nd-AUGUST 23rd! What's more, the link is listed on their "Site Map" under Underwear Day "MODEL CONTEST"!

I had been still wondering whether I'd be the only guy running around the streets of Manhattan in ladies panties in front of the news media (if I went there). Then I tweeted to @Freshpair and @FreshpairWomen , asking: "will it be okay if I run aroud shopping 4 underwear in my panties on #NationalUnderwearDay ?" @FreshpairWomen went ahead and Retweeted my question! 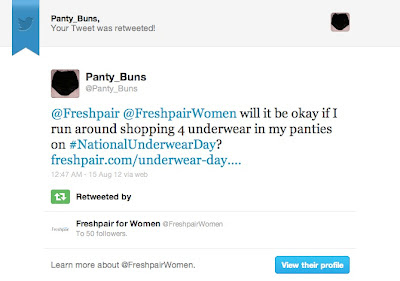 Then, when I checked the link again for updates at "National Underwear Day at Freshpair.com". Here are some quotes from their site:

"Walk through Model Alley and have your picture taken with New York's hottest models."


On the webpage It reads like I could arrive in my Vanity Fair, Maidenform, Warners or Bali full briefs. If I didn't get arrested on the way there I could go buy a pair of knickers at Freshpair and then parade down "Model Alley" in them for the photographers. II wonder if I could parade past the photogs in each different pair I bouht? Since Wacoal is one of National Underwear Day sponsors the Wacoal Awareness Briefs might get me more press coverage, but they do also carry Vanity Fair Lace Nouveau and Vanity Fair Ravissant Briefs which are similar to the pair I'm wearing as I type this.


I'm always prattling about how I'd like to get more famous than Lady Gaga for being seen around the world in ladies panties. In fact, I felt a little jealous of when I saw that there was a nude photo of Lady Gaga featured prominently on a billboard in Times Square. I immediately felt an overwhelming desire for there to be a photo of me male-modeling ladies full brief panties on that billboard.

Arriving at and participating in the Freshpair Event would be a great opportunity to get famous in my panties with live coverage by all kinds of reporters, photographers, print, radio, TV , and paparazzi! The Freshpair site is indicating it's probable there will be television coverage, and I suspect if did I show up in just lingerie with my knickers showing there's a good chance of making the news. How much of a chance would there be of a photo of me in women's knickers being published on the front page of papers like the New York Daily News?

Even though I'll probably chicken out AGAIN, my apparent stage-fright hasn't prevented me from both posting and tweeting the photos of myself in my panties.

I brazenly tweeted a photo of myself in my panties to 7 celebrities:

jpg image: Tweeted Twitpic of myself in black panties to Celebrities 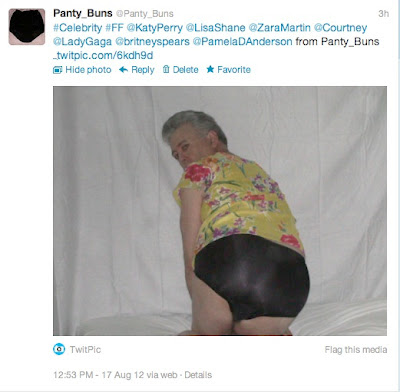 One of the celebrities, Zara Martin, tweeted the photo back out to her followers as a reply saying "Thank You?"

PLEASE FOLLOW ZARA MARTIN! She's wonderful! Her Blogspot blog (without comments enabled) is Zara Martin, and her Twitter is @ZaraMartin. Please check out her @SIXmagazine interview titled: Zara Martin Made Her Mark and her Zara Martin for @ASOS jewelry . In other words, THANK YOU, Zara!


Unfortunately, it's quite likely I'll chicken out yet AGAIN ;(( unless I get escorted to 315 West 57th Street in Manhattan by some aggressive woman (or women) who will give me a ride, pants me, and give me a good push out the car door in my undies. What a likely scenario (NOT!). Why, oh WHY AM I SUCH A CHICKEN? After all, I've received welcome encouragement and directives from you, my commenters. You are my most Cherished Commenters.

I think this would be a good time to say Thank you to my recent Cherished Commenters. My apologies to all those who have commented who I accidentally failed to to add to this list. 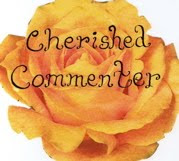 Sher
Beneath The Crystal Stars
@Sheryl_Wee.

Larissa
From Hats To Heels
@fromhatstoheels

If I left your name off my Cherished Commenters list and you want it on, please let me know and I'll try to add you in!

Getting back to the National Underwear Day Pop Up Event in New York City:

If I go, should I wear some of my Favorite pink, black, or turquoise briefs by Vanity Fair or some pastel ones by Dixie Belle (see some of my older posts) or should I wear some of the briefs I've bought but haven't yet reviewed, like briefs from Bali at HerRoom, ShopNational, Vanity Fair and Warners from HerRoom, Macys, J C Penney, Kohls ; silk briefs from WinterSilks?

Oh, who am I kidding. The event is only two days away and I haven't even looked into a place to stay in Manhattan on Wednesday and Thursday. It looks like I'm turning into the sissy who cried "Wolf!" when it comes to actually participating in these events.

UPDATE number 2: OMG! Freshpair saw my tweet about this blog post, thanked me, and asked me to let them know if I'm coming! 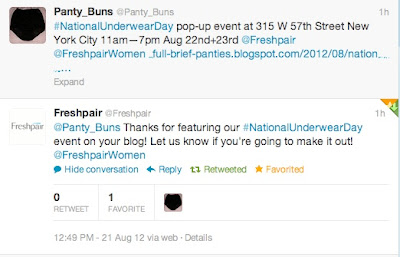 Self-promotion: My Twitter is @Panty_Buns , My male modeled full-brief customer lingerie review videos are at Mister Panty Buns's Video Uploads, and the photos and videos of me male-modeling full brief knickers are also in Twitpics in my Pictures by Panty Buns - Photobucket, and, of course, on the Wordpress page titled "Free-Panty-Photos-Panty-Buns-in-Panties-Modeled-Back-View". All photos and videos of me male-modeling ladies panties are and have been released into the public domain by me, Panty Buns. Please feel free to and do share and re-post them everywhere!

So what do you think? What colour and brand of panties should I wear to arrive and shop in if I can actually get up the nerve to go shopping for underwear in my underwear and participate in the Underwear Day "Model Contest"?