This post is yet another (5th) update/continuation of my prior post (significantly off topic for this blog's theme) titled: HELP SAVE NIKITA! We Need Nikita Season 3! It's on the subject of my favourite television show, NIKITA.

My January post Incomplete and Not so Brief Report on Briefs was much more representative of my blog's theme - on the subject the many brands of full brief panties which I love to buy, wear, review and male model both on my blogs and in my YouTube uploads on Mister Panty Buns's Channel.


The ALL NEW Nikita Episode 2x19 "Wrath" airs Friday April 20th, 2012 at 8 PM EDT/7c on CW TV. We will be trying to trend #RenewNikita on Twitter at 7 PM Eastern time and if it doesn't trend we will be adding "Wrath of Nikitaverse" to our tweets starting at 7:30 PM EDT/4:30PM Pacific.


The trend idea submissions, trend vote list, and tallies were the work of Julie @CW_posts_early on her trending account @KickassNikita. The winning trend idea was submitted by @nikitaobsession and I blabbed it all over the place via my Twitter @Panty_Buns and YouTube account Mister Panty Buns's Channel.


Here is the written synopsis from CW TV:


"When Nikita (Maggie Q) worked for Division, she targeted a man named Nicholas Brandt (guest star Rick Ravanello) and infiltrated his inner circle. She captured him and he's been behind bars ever since. However, Percy (Xander Berkeley) springs Brant, and his first mission is to capture Nikita for payback. After he has her in his clutches, he tortures her, forcing Nikita to face a side of herself she thought she had long buried. Meanwhile, Percy continues to play mind games with Michael (Shane West), Alex (Lyndsy Fonseca) and Sean (Dillon Casey), pushing one of them to the brink of death. Aaron Stanford also stars. Jeffrey Hunt directed the episode written by Albert Kim."

WATCH THIS! See why Nikita is a MUST-SEE!

They have also just started a Twitition - Emmy For Maggie Q. 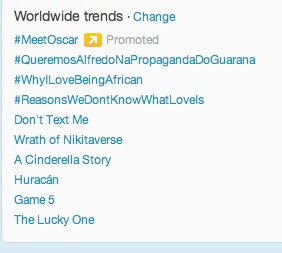 Aaron A. Stanford as Seymore "Nerd" Birkhoff @AaronAStanford on Twitter;

Devon E Sawa as Owen Elliot, a "Guardian". His Twitter is @DevonESawa;

Helena Mattsson plays Cassandra, a double agent for MI 6 and Gogol and the mother of Michael's child;

Lyndie Greenwood as Sonya, a relatively new but brilliant techie working for Division. There is rivalry and mutual attraction between Seymour "Nerd" Birkhoff and Sonya;

Sarah Clarke as Katya Udinov, mother of Alexandra Udinov (both last names should properly be Udinova). In real life Sarah Clarke, who plays Katya Udinov on Nikita, is married to Xander Berkely who plays Percy on the same show;

Thad Luckinbill as Nathan, Alexandra's neighbor whom she had dreams of having a family with;

Tiffany Hines (Wikipedia) as Jaden, one of Alex's fellow Recruits at Division who had an interest in Thom. Her Twitter is @tiffanyhines;

Xander Berkeley as Percy, an sociopathic manipulative evil homicidal mastermind who carries out vile acts for powers that be and on the side for himself and, in his own rationalizations, for Division.

"BIRKOFF IS ARRESTED BY THE FBI — Nikita (Maggie Q) convinces a reluctant Birkhoff (Aaron Stanford) to use 20 million dollars of his own money in a plan to bankrupt Percy (Xander Berkeley) and Division, but when Percy ends up stealing Birkhoff’s entire life savings, Birkhoff and Nikita clash. Team Nikita has one last chance to hit Percy again, but Birkhoff is arrested trying to regain his millions and Nikita realizes she must break him out of jail before Division gets to him. Michael (Shane West) and Alex (Lyndsy Fonseca) go after Birkhoff’s stolen money while Nikita goes to save Birkhoff. Nick Copus directed the episode which was written by Kristen Reidel."

"RYAN TELLS NIKITA IT’S TIME TO INVOLVE THE CIA — When it looks like Percy’s (Xander Berkeley) nuclear weapons plan is getting out of control, Ryan (guest star Noah Bean) suggests they go to the Director of the CIA, Morgan Kendrick (guest star Brian Howe), for help. Nikita (Maggie Q) is vehemently opposed to the plan and is surprised when Michael (Shane West) takes Ryan’s side. Tensions escalate when Nikita is proven right after they discover Kendrick has a link to Percy. Meanwhile, Sean (Dillon Casey) is shot by Percy’s men, shaking Alex (Lyndsy Fonseca) to the core. Aaron Birkhoff also stars. Michael Robison directed the episode written by Kalinda Vazquez."

"PERCY THREATENS THE PRESIDENT OF THE UNITED STATES — Percy (Xander Berkeley) calls the President the United States (guest star Cameron Daddo) and threatens to set off a nuclear explosion unless his demands are met. Birkhoff (Aaron Stanford) finds two scientists who could help stop Percy’s new nuclear satellite, so Nikita (Maggie Q) and Michael (Shane West) head after one and Sean (Dillon Casey) and Alex (Lyndsy Fonseca) look for the other. Unfortunately, Alex and Sean get caught at the very location that Percy blows up as an example of his power. Meanwhile, Nikita realizes the best way to stop Percy is to go into the belly of the beast – Division itself. Danny Cannon directed the episode written by Andrew Colville."

"IT’S NIKITA VS PERCY IN THIS EXPLOSIVE SEASON FINALE — Nikita (Maggie Q) and Michael (Shane West) invade Division in an attempt to capture Percy (Xander Berkeley). Alex (Lyndsy Fonseca) and Sean (Dillon Casey) get caught in a deadly gunfire battle with the U.S. Marines and Ryan (Noah Bean) must convince the President of the United States not to destroy Division until he is sure Nikita and Michael are safely out of the building, but the President is eager to end Percy’s reign. Meanwhile, Birkhoff (Aaron Stanford) asks Sonya (guest star Lyndie Greenwood) for help, and Nikita corners Percy in his office, but he pulls out one final trick that may cost her the battle. Eagle Egillson directed the episode written by Carlos Coto."

During the course of watching past Nikita episodes innumerable times I realized that there is more than ample material (a lot of really ludicrous stuff) for one or more feature length spoofs of Nikita. It's too bad Leslie Nielsen isn't still with us. He'd be fantastic as a bumbling Percy.

I have been lucky enough to enjoy having some of Nikita's cast members reply to me or retweet me as well as reading their tweets: 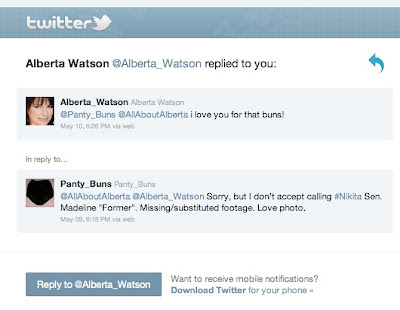 For more reading on Nikita see my previous post: HELP SAVE NIKITA! We Need Nikita Season 3!

You can watch Nikita on Fridays at 8 PM EDT/7c. If you have a Twitter account and want to help with World Wide Nikita trends they start Fridays at 7PM Eastern / 6 Central / 4 PM Pacific time.

UPDATE: NIKITA HAS BEEN RENEWED FOR 22 EPISODES OF A SEASON 3

On Friday May 11th just as we had been finishing preparations to do a Twitter trend including the words "Renew Nikita" producer Craig Silverstein tweeted an earth-shattering BOMBSHELL OF A NEWS RELEASE via a Tweet on his Twitter account @sesfonstein!

Craig Silverstein"Um, don't know if y'all are interested but Nikita season 3 is ON!!!"
MaggieQ: "Holy SHIT! Thank u Nikita supporters! We DID it!" Here are the pics of the Tweets: 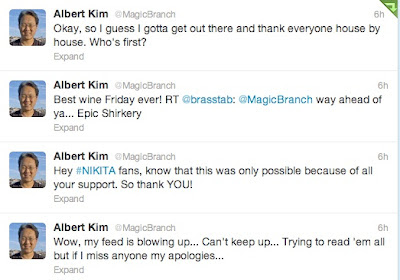 Needless to say the trend idea "Renew Nikita had to be changed. Last Minute we picked "NIKITAAA Renewed" 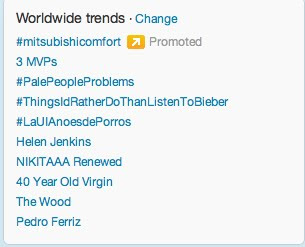 The renewal of Nikita for Season 3 changes everything. This post will be updated in the future (hopefully soon). I will add some postscripts, may do a new Nikita post or may even start a new blog devoted to Nikita. The writing is already underway.

In the meantime I should have been be summoning my nerve and thinking of what to do, blog, post and Tweet about for Friday May 4th, "No Pants Day" - here on this blog, on my Twitter @Panty_Buns and if I'm brave enough to participate (I'm such a scaredy cat) post a video to my YouTube Channel.