I was just about to write a post when I noticed that almost all of the approximately 80,000 page views for my blog had disappeared. Apparently it happened within the last day or two. People have been doing entire blog posts on the missing page views and commenters have been worrying whether they'll get their views back. Fortunately it's now a Known Issue and Blogger is working on it. See http://www.knownissues.blogspot.com/2012/10/missing-stats-for-pageviews.html UPDATE: Blogger fixed it quickly! Thank you Blogger!


UPDATES A while after my last post titled "Lingerie News: Lady Gaga, Football, PINK, Undie Awards" I discovered that I had overlooked some videos uploaded by Vanity Fair on their Undie Award wining panties and a video that had been by Victoria's Secret PINK featuring their NFL Collection.

There had been, as you might recall, a lot of news regarding the NFL using replacement referees who had been previously fired for incompetence by the Lingerie Football League

Those look like some really hard hits with insufficient padding in those Lingerie Football League Games. Ouch.

Some of the quotes from the "Victoria's Secret New! PINK NFL Collection" "GAME ON" (in yellow undies) "PLAY THE FIELD" "SCORE" (in red undies) "DRAFT YOUR FAVES" (in striped undies) "ALL 32 TEAMS"

I also noticed that YouTube user Vanity Fair Lingerie had already uploaded a video titled "Vanity Fair Perfectly Yours Ravissant Tailored Brief" which I'd wanted to see on YouTube. There was no mention in the video of the brief having won Undie Awards in 2008, 2011, and 2012 since they apparently uploaded the video prior to winning the award yet again.

Transcript: Add a little feminine flair to your intimate apparel wardrobe with the Vanity Fair Perfectly Yours Lace Nouveau Brief. The beautiful lace insets offer a delicate appeal, while the elastic waistband and leg trim give you a flexible and comfortable fit. This silhouette promises full coverage in both the front and back. Satiny nylon fabric keeps you comfortable throughout the day. Discover the elegant sophistication of Vanity Fair's Perfectly Yours Lace Nouveau Brief.

As I watched these videos it I couldn't help but continue to feel miffed that some of my ten customer lingerie review videos featuring me in the exact same brand and style of Vanity Fair Perfectly Yours Lace Nouveau Briefs had been marked with a warning: "This video may contain material flagged by YouTube's user community that may be inappropriate for some users" and requiring people to sign in in to view them. One poorly lighted video of me modeling and reviewing these same briefs had previously disappeared - in it's place was a statement slandering me, saying: "This video has been removed as a violation of YouTube's policy on nudity or sexual content". It was a clear-cut case of sex discrimination and obvious that the real objection was to me being a MAN SEEN WEARING LADIES PANTIES! 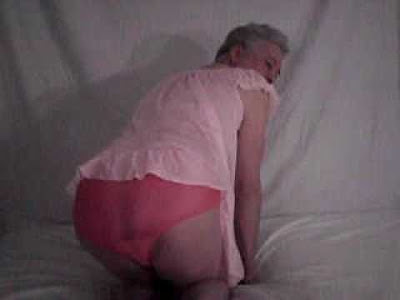 You've probably seen the customer lingerie review videos of me male modeling the pink Vanity Fair full briefs before, but in case you haven't, here's one embedded so you can watch it yourself.

The brand and style of full coverage Vanity Fair Perfectly Yours Lace Nouveau Style 13001 ladies full brief nylon panties that I'm shown male modeling in this video are available both in a wide variety of lingerie and department stores both online and in - store. This particular style of Vanity Fair ladies nylon full brief panties are made of a satiny soft finely woven nylon tricot with a cotton lined gusset and triangular lace insets. Vanity Fair advertises these panties as being both comfortable to wear and pretty to look at, and they really are! I love the look and silky feel of these panties and wish I could find more of them in a similar vibrant ultra-feminine pink colour. This video is released into the public domain. Please share it. I apologize once again for not taking and posting new photos or videos of myself male-modeling and reviewing lingerie on this blog, on my YouTube (Mister Panty Bun's Channel) in my Photobucket album in Twitpics and to tweet on my Twitter @Panty_Buns for all the world to see. As always, I love having the photos and videos of myself male-modeling and reviewing women's underwear shared and republished as much and as widely as possible. UPDATE: Blogger has fixed the page-view counter. Thank you Blogger! Tweet
Posted by Panty Buns at 10/15/2012 12:03:00 AM