Not long after Lady Gaga first came to my attention I was very much taken aback by the extent to which she was initially savaged and ruthlessly criticized in the press and on the internet. The Hollywood Gossip ran a story criticizing her for her supposedly shocking performance at the MTV Video Music Awards. They ran a piece claiming that Lady Gaga's VMA performance offended pretty much everybody . The first thing that caught my attention when I looked to see what all the fuss was about, was that Lady Gaga's voice and singing are phenomenal. She has the voice of an operatic angel. I quickly learned that Lady Gaga had won big at the MTV Video Music awards, winning Best New Artist, Best Art Direction (Paparrazzi) and Best Special Effects (paparazzi). I saw the performance it on her official site at . Most of the criticism of the official music video "Paparazzi" seemed to miss the main themes of the video, which centered on the love/hate relationship between stars seeking fame and the danger of the way stars are treated by the paparazzi. It is a valid point which has not been adequately dealt with to this day. How soon the tragic death of Lady Diana seems to be brushed aside by these money hungry photographers. They stalk, invade privacy, and even break the arms of stars with their bulky cameras trying to get in too close.
Another ridiculous rumor that was circulating for a while (maybe it still is) is that Lady Gaga was actually not a woman. If one checks out the multitude of photos of Lady Gaga in her knickers it becomes obvious that she is all woman. One can easily see how different a male looks like in panties even from the rear by looking at the photos I posted of myself (for adult women only) in my ladies_full_briefs-male_modeled-back_view . I am so thankful that Lady Gaga made public panty wearing fashionable. Her entire cast was wearing panties in an absolutely fantastic MVA performance. I am so glad she posted it on line. It is about time a mature women with that kind of talent get the amount of recognition and respect commensurate with their talent from both the public and the paparazzi.  That Music Video Award performance was incredibly artful and entertaining. Not only was I definitely not offended, I feel I have become a fan, and checked out Lady_Gaga_on_MySpace as well.
Right at the beginning of the song entitled: 'Don't Dream It', Be it' in the Rocky Horror Picture Show, Dr. Frankenfurter (played by Tim Curry) sings: 'Whatever happened to Fay Wray? That beautiful satin draped frame. As it clung to her thigh, How I started to cry, 'Cause I wanted to be dressed just the same.'  That's a sentiment that struck me and some time ago I used to go out in drag on Halloween. 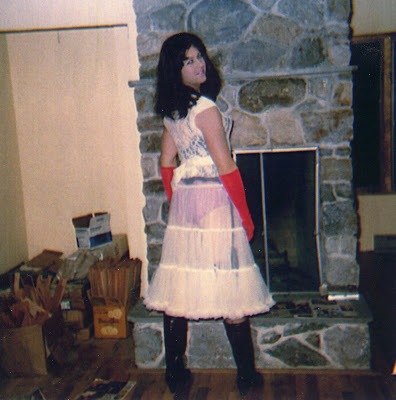 I bought the soundtrack album to the movie Rocky Horror and saw it in person 11 times. On the subject of possibly dressing as Lady Gaga some Halloween (or any other time), I do like the idea of an excuse to have my panties show as they do in photos on my  site. I have become an (unofficial?) Lady Gaga fan. On the subject of Lady Gaga's messages, I loved the one she sent_loud_and_clear at the Gay Rights Rally at the National Equity March. (I saw it posted over at Grace The Spot where I was first introduced to the YouTube video of Pink - Sober where pink also appears in full brief panties and also has an unbelievable singing voice. Another favorite of mine). I noted in the video clip of Lady Gaga at the rally in Washington D.C. she was wearing pants. Sex may not equal power, but it can be be used in a powerful way by the ones being watched. I wonder how much more media attention and air time lady Gaga's short speech would have gotten had she been standing there in her panties instead of wearing pants? Not long ago there was a post on the Bitch magazine blogs entitled "Sapphic Salon: Why Lady Gaga is important for gay women ". The post included an imbedded YouTube video of Lady Gaga being interviewed by Barbara Walters Irrespective of the non-issue whether or not being bi would sell more records and whether Lady Gaga uses her sexuality to her advantage, the facts are these: Lady Gaga HAS IT ALL AND THEN SOME! She has a fantastic voice, is an excellent musician, writes interesting lyrics, is a fabulous entertainer, is incredibly sexy, brave and forthright. If her sexuality and her panties showing help, then good for her! HAVING IT ALL is what makes her more than just another star. It's made her a phenomenon. In My opinion, the panty wearing stars Pink, Madonna and Lady Gaga all really rock and will forever be music and entertainment legends.
Posted by Panty Buns at 12/17/2009 08:33:00 PM