Lingerie was in the news a lot this past week and this post barely scratches the surface of it all. My apologies to all the wonderful lingerie retailers who aren't mentioned in this post. I hope to get to everyone eventually. Meanwhile, here's some of the lingerie that made the news:

LADY GAGA made the news in her yellow lingerie

Lady Gaga put herself in the news in her panties again. This time she Tweeted four photos of herself wearing just a skimpy pair of yellow knickers and matching bra. As X17 Online put it: Lady Gaga Asks Fans To Join Her "BODY REVOLUTION" Campaign

Zimbio published an article by Alicia Diaz Dennis titled "Lady Gaga Strips Down to Lingerie for 'Body Revolution 2013' ". The article republished photos from LittleMonsters.com, Lady Gaga's social networking site along with a quote from Mother Monster. Quoting the Zimbio article which in turn quoted Lady Gaga: Gaga kicked things off by posting several pictures of herself in a yellow bra and matching panties, with the captions, "Bulimia and anorexia since I was 15. But today I join the BODY REVOLUTION. "

The SUN: "Lady Gaga wades into weight gain debate-with snap in her undies"

Some sites, such as Celebrified, ignored the message and simply republished the photos with the headline "Lady Gaga Tweets Bra & Panties Photos" 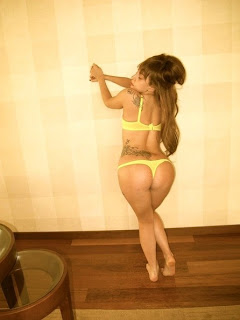 A not-so-nice article in "The Twist" which featured the photos of Gaga in her yellow bra and knickers was quite cynical and titled "Lady Gaga is A Show-Off, Lost 25 Pounds in 7 Days" saying "Face it, you shrunk because you’re not as comfortable in your skin as you tell everyone else to be."

So is she really going to try to help? I think there are better organizations to contact for help with eating disorders, but Lady Gaga does reach a large audience when she puts her knickers on display. By contrast, the National Eating Disorders, NED Awareness Week and the First UK conference into eating orders in sport on 27 September, 2012 got very little notice. . I seem to recall Eating Order Awareness being encouraged by Laura who writes A Daisy Chain Dream.

I love that Lady Gaga has helped make wearing panties in public fashionable, but being a vegetarian on principal I was very much sickened by her wearing of a meat dress. Gaga does seem, as Madonna does, to thrive on controversy and sometimes she seems seems a bit out of touch - and sometimes fans get caught in the cross-fire. Gaga come out against wearing fur on the Ellen Show and after she Retweeted a poster of herself posing with what appeared to be a wolf carcass for the movie Machete Kills she found herself in PETA's crosshairs . People were being asked to choose between @Peta and @LadyGaga. Some fans of Nikita's MaggieQ who is a staunch PETA supporter were also fans of LadyGaga. Apparently some mean things were said both between PETA and Lady Gaga and also between fans and feelings got hurt. Peta has a lot of celebrity supporters, including Kim Basinger, @Pink, @LyndsyMFonseca, @AngelaSimmons, @AliciaSilv, @bifnaked , @PamelaDAnderson, @BreeOlson, @KatieKModel, @NAPIERMAKEUP, and First Lady Michelle Obama (Sorry from straying off-topic).In other lingerie news:

THE NFL increased the credibility of the LINGERIE FOOTBALL LEAGUE whilst losing some of its own credibility, bringing the LFL (and their YouTube Channel, the Lingerie Football League's Channel) to my attention. 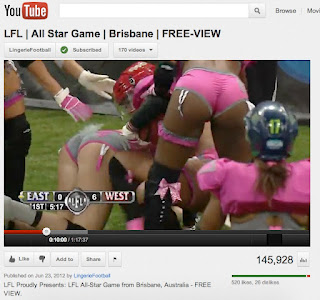 InsideEdition.com published a photo along with it's article titled: Game-ending call from #NFL replacement refs sparks uproar Controversial Referee Call Outrages NFL Fans. The article stated that "The replacement refs involved in the controversial touchdown are being linked to the Lingerie League.

It seems that he Lingerie Football League, whose Twitter is @MyLFL, had fired the same crew of Replacement Referees for incompetence prior to their having been hired by the NFL .

Even Forbes did an article titled Lingerie Football League: We Fired Some Current NFL Replacement Refs Forbes reported that the blown call "...caused a half-billion in betting funds switch hands..."

The commissioner of the Lingerie Football League was quoted in the LA Times as saying "The entire crew was released due to several poorly called games which included missed calls, poor judgment and poor presentation for broadcast. They were hurting our overall broadcast caliber. And if it's opening up our players for potential injury, those things raise red flags here. When either of those two things are compromised, it's time to start thinking about parting ways."

The LA Times article by Houston Mitchell opens with the line: You know you are in trouble when even the Lingerie Football League is making fun of you.

The controversy has been cited as a factor in getting the contract negotiation talks between the referees and the NFL to progress swiftly.

As Fox News astated in the first sentence of their article titled: Lingerie League, lawmakers pile on replacement refs "Everyone from lawmakers to lingerie lovers are piling on the NFL"

The lingerie-related coincidences just kept on popping up:

There was an article in the Arizona Daily Star titled NFL: Notebook: Lingerie Football? Shh, Cowboys have a Secret. The timing of the blown call by NFL Replacement Refs and the FRONT PAGE DAILY NEWS STORY featuring the Lingerie Football League couldn't have been better for Victoria's Secret and their plan to open a Victoria's Secret "PINK" Lingerie store at Cowboys Stadium today, October 1st, 2012. The online Victoria's Secret PINK advertisement currently features a photo of a model holding a pink football, wearing (surprise) a Green Bay Packers jersey and advertises the Pink NFL Collection. 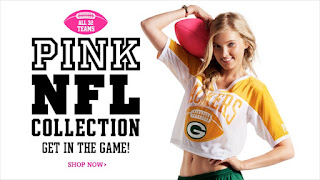 More lingerie news: THE 2012 UNDIE AWARDS (Note: this post may need a follow-up at some later date).

This week I discovered via Twitter that the 2012 Undie Award Winners have been posted. 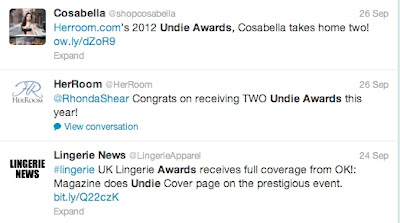 This full brief by Vanity Fair is once again your favorite. Made of 100% nylon for a silky soft feel, this panty provides full coverage. It's offered in many different colors so everyone can have the color they love. The panty has an ultra-soft covered elastic waistband and covered elastic leg openings for a comfortable, custom fit. Comes in sizes 5 to 12 (Small to 5X)

I love the video titled "Vanity Fair 15712" on their site and am hoping it gets uploaded to HerRoom's YouTube Channel along with videos featuring all the other 2012 Undie Award winning lingerie.

Once again I've been lax and have yet to take any new photos or videos of myself male-modeling and reviewing lingerie to accompany posts on this blog, in on my YouTube channel (Mister Panty Bun's Channel) my Photobucket album (although photos from there don't seem to be visible when posted on other sites - not sure why), in Twitpics ant to tweet on my Twitter @Panty_Buns. Please share!

Naughty me for being so lazy, tardy and unproductive.