This post is incomplete, but If I wait until I cheer up or gain common sense it will probably never get written. I have both put on weight, and have been quite depressed. Why I am depressed: Because I am a jackass and have apparently managed to get myself abandoned all over again by the love of my life to whom I made a permanent proposal of marriage to 41 years ago. I haven't seen her in 40 years and she hasn't spoken to me in ten months. I don't think she likes me male-modeling full brief panties on my blogs and on my YouTube Channel. Recently I've been stopping by there a lot and listening to the songs on a Playlist titled "Love Forever" on my YouTube channel, wallowing in self-pity, aching and missing her. I thought about writing a post on the subject including how we'd met, the relationship, how and why she'd left, and how all the feelings came rushing back while I was watching the end of Scene 8 in the Movie "Love actually". I started to write a post about it titled "Unrequited Love" or "Love Forever" but then wondered how she would feel if she saw our story on the internet without my having asked her feelings about it first. It's not really on the topic of full brief panties, so I'm wondering: If I ever do write that post should I start a different blog for it?

I started this post, to be titled "A Briefs Update" many months ago.

One of the most frustrating things I have run in to in the course of trying to have an informative blog about full briefs is when lingerie manufacturers eliminate links entirely, either resulting in a not found message or simply returning readers to the manufacturers home page. Many of the links I had included in my post "Male Models Maidenform Dreams" now return readers to the Maidenform Home Page instead of lining to pages of Maidenform's history and the various styles referenced. Now, at the time of this writing, instead of the many detailed pages of Maidenform history that I had linked there is but a single web page referencing "A look at Maidenform OUR HERITAGE throughout the years".
The diminished attention to Maidenform's history on the site seems to be mirrored by a diminished amount of concern for continuing the availability of the vintage looks and classically tailored styles that so many of us had come to love.

Some of the difficulties of writing this post was trying to keep up to date on what colours and sizes of which style and brand of briefs were available and from where. Sometimes when briefs I've posted images of are either not in stock, backordered, discontinued or had a change in style number there may be problems with the links. Sometimes having just a Style numbers colour name won't be enough to locate the desired briefs without having the right SKU number.

Maidenform "Wise Buys" Tricot Full Brief shown in this photo of the classic Maidenform panty being worn by a skinny model. 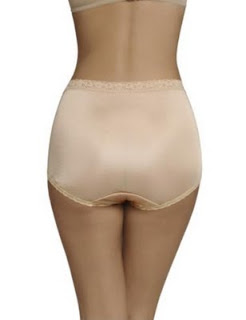 
Maidenform's website currently lists the nylon tricot full brief panty in White, Ivory, and Body Beige, but the colors are not all available online in all sizes. UPDATE: Unfortunately as of the time and date of this post the wonderfully tailored, comfortable and pretty Maidenform "Wise Buys" Tricot Full Briefs there is no price or size availability entered on their online site and the main site link for full briefs only shows them in cotton. ;-( Oops! that changed during the course of writing this. They are now available in ivory in size 5 and size 6 in body beige. I bought some and a blouse to go with them but I''ve gained weight and am not ready to model them at the moment.

All three of the colours of Vanity Fair Ravissant briefs I ordered (Muted Lilac, Soft Blue, and Acai Berry) were on backorder. Isaac Sultan & Sons did wind up sending the pairs in Soft Blue which I had ordered, but apparently cancelled my orders for the other two colours of Ravissant Briefs. ;-(

The one colour of Vanity Fair Style 15712 Ravissant full brief nylon panties that Isaac Sultan did eventually send (Soft Blue) had been but is apparently no longer available from HerRoom. HerRoom had a much faster delivery time back when I had ordered this style of nylon briefs in Blushing Pink (almost as fast as Macy's, Sears, or JC Penney).

At the time of this writing, both the Vanity Fair Perfectly Yours Style 15712 Ravissant briefs from HerRoom as well as the Vanity Fair Lace Nouveau Style 13001 full brief nylon panties with lace insets were available in sizes 5 - 12 in Star White, Candleglow, Blushing Pink, and Midnight Black.

At that time Macy's was listing Vanity Fair Brief, Perfectly Yours Lace Nouveau Nylon Style 13001 in the colour "Sugar Berry" in sizes 7 and 8 in addition to Candleglow in 5, 6 and 8, and Fawn, Midnight Black and Star White in 5, 6, 7 and 8. (larger sizes were a different style number). i was lucky enough to get 3 pairs in the colour Sugar Berry ( wine red) from Macy's. 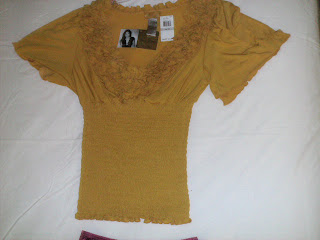 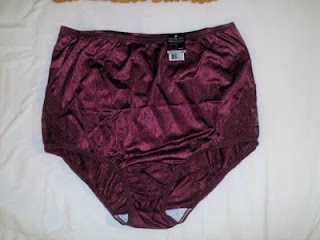 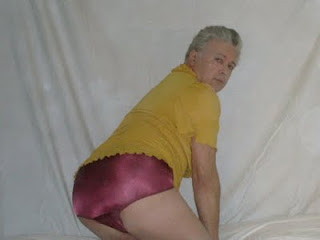 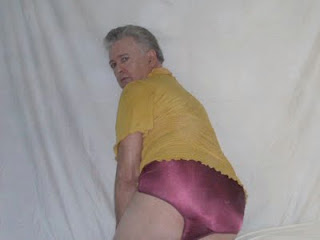 I did take and upload a brief video of myself male-modeling these briefs. It's titled:
"PICT_Male_Models-VF_13001-Wine_Red-Nylon-Full-Briefs-0011.AVI"

Transcript: "Hi. The ladies panties that I'm male-modeling right now are Vanity Fair Perfectly Yours Lace Nouveau Style 13001 full brief nylon lace-inset panties. The color is Sugar Berry. The blouse I'm wearing is from Baby Phat, spelled B-a-b-y P-h-a-t. It's an amber yellow. Um, this video is released into the public domain for, uh, for sharing for any purpose including for lingerie comparison or information purposes."

At the time of this writing the video had just over 100 views, no "likes" (thumbs up) and one "dislike" (thumbs down. Not only that, but two of my videos got "False Flagged" as "may contain material flagged by YouTube's user community that may be inappropriate for some users"

If you have a YouTube account and log in I could use some support in the "Like" (thumbs up) department for the videos of me in the pink briefs as well as the wine red ones.

Among the underwear in public events that I have neglected or been tardy in blogging about between my last post, "Beautiful Bloggers, Cherished Commenter, Fabulous Followers", and this post were:

Impov Everywhere's No Pants Subway Ride 2011 took place January 9th. According to Improv Everywhere's Charlie Todd, "over 5,000 people took off their pants in subways in 48 cities in 22 countries around the world." . Since I took the screenshot below, the video has had another 230,000 views (1,401,570 views as of when I typed this). 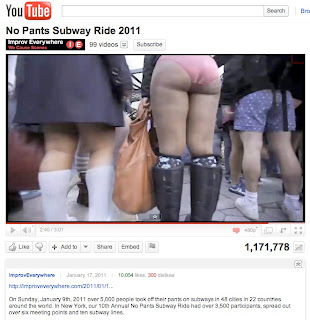 Improv Everywhere posted a video of the No Pants Subway Ride 2011on YouTube .

I am thrille National Underwear Day in Brazil, but Metro.co.uk did one with 10 photos. There were numerous other posts with pics including at The Lingerie Post

The first Friday in May, Friday, May 6th, 2011, was No Pants Day. So far I only found one video on YouTube - No Pants Day . It was uploaded by WhyParty Today and was of Elizabethany (O-Air radio personality and blogger) bravely taking to the streets and the office after taking her pants off and hopping down the highway in her panties!

The underwear as outerwear trend has continued as reported in the IndependentWoman.ie article titled: "An Overview of Underwear" by Hilary Alexander. Dolce & Gabana paired black jackets and retro lace knickers at their AW2010 show and the trend seems to be getting even more popular by the day.

It may take a while before I get back into better shape and get around to male-modeling and reviewing several different brands and colours of full briefs I purchased recently, especially if I keep wallowing in self-pity and sniveling about the long lost love of my life whom I've not seen in 40 years who may not want to see me again.

I have a "Love Forever" playlist on Youtube that I listen to while I'm moping:

"Serendipity" - "When You Know" (by Shawn Colvin)

Roxette - Listen To Your Heart,

Delta Goodrem - "Lost Without You",

Bee Gees - 'To Love Somebody',

Obviously this post was very incomplete with respect to the long promised "Briefs Update". Among the brands of ladies full brief panties I had purchased with the intent of reviewing (it will have to be "A Briefs Update Part 2") are Bali, Warners, Maidenform, WinterSilks and some ordered from ShopNational. I am very very tardy.
Posted by Panty Buns at 5/14/2011 11:21:00 AM