At one time Maidenform made and sold a wider selection of classic women's full brief nylon underpants than they do today. Maidenform full brief nylon panties had a very generous full mushroom shaped cotton lined gusset. The large curved rear seam of the gusset rose fairly high. I considered it to be a delightful design feature. The classically tailored vintage Maidenform briefs had some shape and were designed for real women, not toothpick-thin models. You can see how pretty this design feature was in my post titled "Male-Modeling Maidenform Dreams". These briefs used to come in a variety of colours including a gorgeous vibrant feminine pink. By the time I wrote the post "Male-Modeling Maidenform Dreams Part 2" Maidenform's Tricot Full briefs were getting harder and harder to come by, the rear seam of the gusset was closer to being straight across, and the colour selection was sparse. Now it seems the only full briefs Maidenform is making are the Flexees Shaper Panties I'm seen modeling and reviewing in this post. Now that Maidenform has been acquired by Hanes Brands I'm hoping the more traditional briefs will regain some attention.

It only occurred to me after I noticed how pretty this pair of Magenta Maidenform Flexees shapewear panties looks on me in the photographs below, that perhaps the title of this post should have been Male-Modeling Maidenform Dreams Part 3 and be a sequel to my earlier posts.

My lingerie fashionista blouse and panty outfit of the day: A pair of Maidenform Flexees Weightless Comfort Briefs Style 2564 in "Magenta Me Crazy" from Bare Necessities styled with a Jaclyn Smith Women's Plus Floral Ruffle Top in Brooke Green from Kmart


Quoting from Kmart's webpage about the blouse I styled in this outfit:
"Liven up your look with the energetic style of this women's plus top by Jaclyn Smith. This silky shirt features a floral graphic and flutters with rows of eyelash ruffles, jazzing up any casual outfit with fashionable flair. Short sleeves and a V-neckline make it ideal for showing off your favorite jewelry." 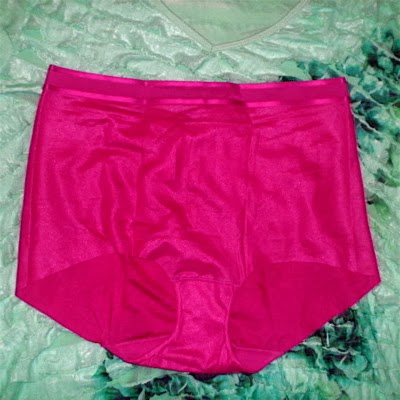 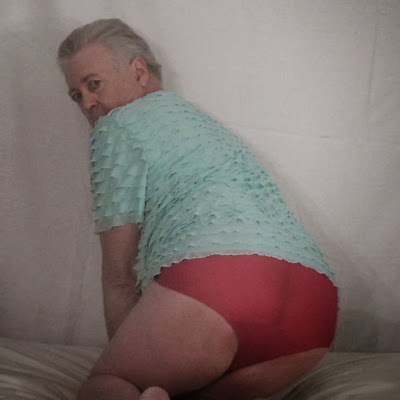 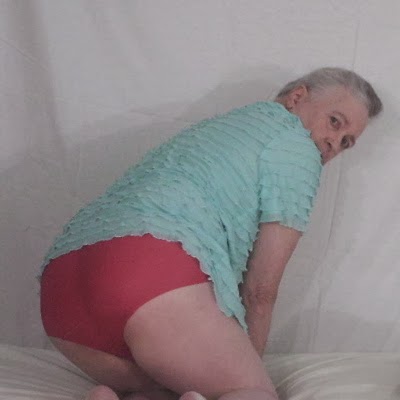 img_Panty_Buns-male-modeling-Maidenform-Flexees-magenta-nylon-full_brief-panties.jpg
MOV Lingerie Review Maidenform Flexees Magenta Nylon Full Brief Panty
I bought the Jaclyn Smith women's plus floral ruffle top in Brook Green that I styled with these Maidenform Flexees briefs for my blouse and panty OOTD from Kmart and purchased the Flexees Weightless Comfort Brief 2564 in the colour "Magenta Me Crazy" from Bare Necessities.
TRANSCRIPT: "The pair of ladies full brief panties that I'm male-modeling in this customer lingerie review video is a Maidenform Flexees Shape Panty. Um I bought it primarily because of the colour. It's very pretty, and the name made me laugh. It's 'Magenta Me Crazy'. Uh, for this video I've paired this pair of panties with a ruffle blouse, a floral ruffle blouse in green from Jaclyn Smith. Um, this pair of Maidenform Flexees panties is, has laser cut leg holes, the idea being, that it wouldn't leave a panty line. it also has a back seam which gives the initial impression that they're sheer when in fact they're not. They're uh, an opaque panty. Um, the back seam does give some shape to the panty. Uh, to me it feels like they're riding up. I prefer to have uh, an, I prefer to have elastic at the leg holes to help hold them in place and prevent ride-up, um, and I'm not concerned about the panty lines. This customer lingerie review is released into the public domain."
Watching the customer video lingerie review of this pair of Maidenform Flexees shaper panties they appear to fit me much better than I realized when I was making the video review. Perhaps I should have worn them all day long to see whether or not they would actually ride up or whether they might stay put and continue to look pretty. It could have been that I'm just not used to wearing fitted back-seam panties with no elastic at the leg holes. The fabric felt good against my skin and I LOVE the colour!
Those who follow me or read my reviews regularly probably already know that I like having panty lines and the underwear as outerwear look, whereas these briefs seem intended to make it appear like no underwear is being worn at all.
How do you feel about briefs with back seams and forgoing elastic at the leg holes in favour of having no discernible panty lines?
What do you think of the "Magenta Me Crazy" colour of the pair of ladies briefs I'm seen modeling and reviewing here?

Do you like the look of the Jaclyn Smith women's plus floral ruffle top in Brook Green I styled with these shaper panties to complete my outfit of the day?

Are these magenta Maidenform Flexees shaper panty briefs pretty enough that I can keep my male-modeling Maidenform dreams alive?

If you don't already know what my male-modeling Maidenform dreams were you can read about them at the beginning of my earlier posts titled: Male-Modeling Maidenform Dreams and Male-Modeling Maidenform Dreams Part 2. You can see the earlier customer lingerie review videos of Maidenform briefs embedded in those posts or see them on my YouTube channel at http://www.youtube.com/user/misterpantybuns/videos.
Please feel free to share your thoughts and leave your Fbloggers, Lbloggers and Bbloggers links below, or Tweet me on my Twitter where I am @Panty_Buns.
NOTE: YouTube wrongfully removed the video that went with this post and issued a strike against my YouTube account for it - a blatant example of sex discrimination being practised by YouTube UPDATE: Those blatantly discriminatory actions apparently were not enough for the bigots at YouTube. YouTube subsequently compounded their egregious bias motivated strike and removal of the video that was embedded in this post by REPLACING IT WITH OUTRIGHT LIES ABOUT ME AND ABOUT THE CONTENT OF THE VIDEO POSTED AT THE URL WHERE MY VIDEO HAD BEEN WRONGFULLY REMOVED, claiming: "This video has been removed for violating YouTube's policy on nudity or sexual content." As you can see quite clearly from the transcript that accompanied the video (above) and from and from the photographs (also above), YouTube OUTRIGHT LIED, FABRICATING AN EXCUSE FOR THEIR BLATANTLY ILLEGAL SEX DISCRIMINATION AGAINST ME. The REAL reason they removed the video was because one or more bigots on the YouTube team did not like the fact that the gender association of the blouse and full briefs I was reviewing do not match my gender - yet another case of BLATANT and INDEFENSIBLE SEX DISCRIMINATION PRACTISED BY YOUTUBE, compounded by their publishing/ posting bald-faced disparaging lies about me and about the content they wrongfully (and illegally) removed. I suspect that the bigoted YouTube operatives responsible for this abuse of power reasoned that I could not do anything about their hurtful discrimination because of the facts that I do not accept money for anything I post on the internet, and the fact that Google's YouTube has so much more money to spend for lawyers than I do. THEY ARE BIGOTED BULLIES who should by rights have anti-trust actions brought against them. Apparently the management at Google's YouTube feels they have enough money for lawyers and have enough politicians in their pocket that they are not concerned at all when their bigoted employees discriminate with total impunity against minorities at will, and with malice. Please feel free to leave opinions in the comments about my modellling ladies full brief full coverage nylon panties on the internet, but understand that it is my right to do it without being censored. ALL PHOTOS OF ME MODELLING FULL BRIEF PANTIES on blogs and on my Twitter @Panty_Buns and all videos of me modelling full brief panties on my YouTube misterpantybun's channel have been released into the public domain and are FREE FOR REUSE, downloading, re-uploading etc.. PLEASE FEEL FREE to share, publish, republish, distribute, post and display them anywhere and EVERYWHERE.
Posted by Panty Buns at 2/01/2014 09:35:00 PM